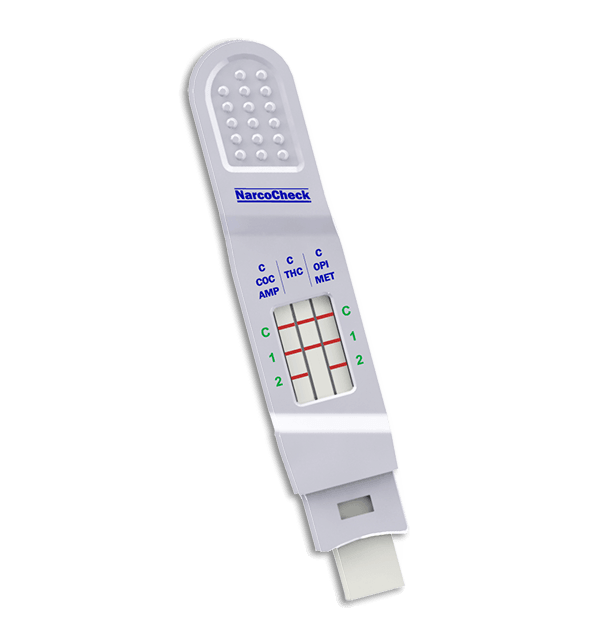 The NarcoCheck® Saliva test detects 5 drugs simultaneously: cannabis, cocaine, heroin, ecstasy and amphetamines. It is one of the only saliva tests in the world capable of detecting the molecule of cannabis that is found specifically in saliva.

The last generation of saliva tests!

NEW GENERATION TEST FOR ROAD PREVENTION
Even more simple than ever, faster and without any manipulation!

With the NarcoCheck® Saliva test: the detection is made on native Δ9-THC, which is the molecule of cannabis that is found specifically in the mouth, because it is contained in the smoke of cannabis cigarettes. When a person smokes a joint, this smoke will contaminate the mouth and leave traces for several hours. The NarcoCheck® Saliva test will detect these very traces, the same as those sought by the Police. So, it is not a basic modified urine test, but a real innovation in salivary screening.

With the classic tests:
Current saliva tests are, for the most part, designed to detect in the saliva the same traces of cannabis as in the urine. However, several scientific studies have shown that barely no amount of this molecule (THC-COOH) is found in the saliva. Only the pure and native Δ9-THC molecule is found in saliva. As a result, a too high rate of false negatives is observed (the test is negative whereas it should be positive).

What does this test detect?

This saliva test detects the 5 most commonly used drugs, which are also those detected during road side testings: cannabis, cocaine, heroin/opiates, amphetamines and Ecstasy/Methamphetamine.

What does this test reveal?

It will show a positive result if the person tested has used cannabis in the last 4-6 hours. This is the time during which cannabis use causes psychoactive effects. In other words, the test will be positive when the person is under the influence of cannabis intoxication.

This test will also show a positive result if another drug has been used in the last 24 hours.

Small and very easy to use, this test is perfectly adapted to self-testing. Users of cannabis or other substances can now reduce by themselves the road risks linked to their consumption.

The benefits of saliva tests:

The principle is simple:

1 The donnor must put the absorbant tab in his/her mounth and salivate on it for a few seconds.
That's it ! Nothing more.
The test will then start automatically. 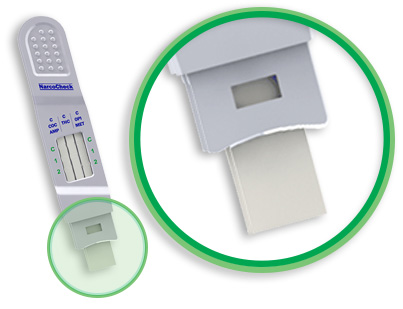 2 Read the results after 10 minutes.
The test consists of 3 test strips, each detecting 1 to 2 drugs.
On each strip a red line will be displayed (or not) in position 1 and 2.

NarcoCheck® - Saliva test: multi-drugs (5 in 1)
Click to see the details

FAQ
What is the difference between and ?

The Δ9-THC (pronounced "delta 9 THC") is the name used in the raw cannabis molecule, as it is found in hashish or weed (marijuana).

Once smoked or ingested, the human body must modify this molecule in order to eliminate it. It transforms it into a sub-molecule, which will be found especially in the urine: THC-COOH (also called 11-nor-Δ9-THC-COOH).

Why is it important to judge the performance of a saliva test?

Because in the mouth, the Δ9-THC is massively found.
On the other hand, barely no traces of THC-COOH are found, which becomes virtually undetectable after a few tens of minutes after smoking a joint.

To effectively detect cannabis, a saliva test must therefore be calibrated to detect Δ9-THC.

The problem is that most current salivary tests are modified urine tests, and therefore detect THC-COOH.

Therefore, knowing the exact nature of the target molecule is crucial when choosing the saliva test to use!

Can a saliva test replace a urine test?

No, simply because it is not made for that.

Saliva tests are actually very effective where urine tests are not effective at all. Traces of cannabis can be detected in the saliva almost immediately after its consumption, whereas it is often necessary to wait more than 6 hours to see traces in the urine.

Salivary screening will thus be fully effective over a period of a few hours following drug use. This period can be more or less long depending on the metabolism of people and their level of consumption.

A saliva test can tell: "The person tested used cannabis less than 6 hours ago".

Each type of test therefore has its specificity and none can replace the other.

NarcoCheck® - Saliva test: multi-drugs (5 in 1)
Click to see the details

In stock
View this product
Check the 5 most commonly used drugs in a single urine test.Cannabis, Heroin, Cocaine, Ecstasy and Amphetamines.Very easy to use, this multi-drugs test is the ideal solution to make a first review of the situation.
Saliva tests

In stock
View this product
Saliva test for cannabis (THC) screening. Designed for the detection of recent cannabis use and road safety (preventive self-screening before driving). One of the only tests in the world to detect the molecule of cannabis specific to saliva (the one currently sought by the Police). The last generation of saliva tests!

In stock
View this product
Allows the detection in urine of CarFentanyl use, which isconsidered today as an new synthetic drug. Made in France under ISO 13485 certified production lines. Highly reliable.
Urine drug tests 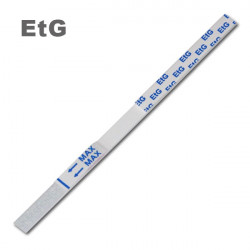 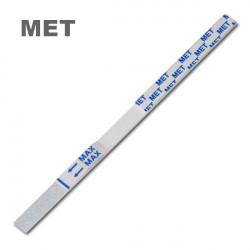 In stock
View this product
This urine strip detects Methamphetamine use in just 5 minutes. Very easy to use and very economical.
Urine drug tests 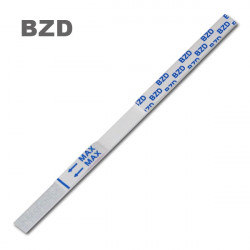 In stock
View this product
This test strip detects the consumption of anxiolytic, hypnotic drugs ...Easy to use and very reliable.
Urine drug tests 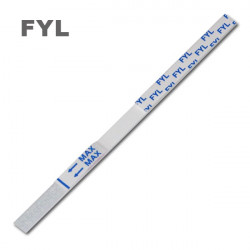 In stock
View this product
Made for the detection of Fentanyl use in urine samples. ISO 13485 ceritifed.
Urine drug tests 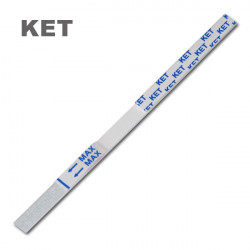 In stock
View this product
Ketamine rapid test strip. Detects the use of ketamine in 5 minutes into urine samples.
Identification tests for solid substances 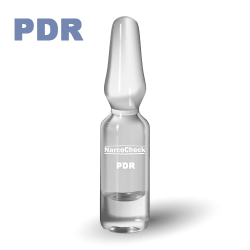 In stock
View this product
To identify certain medicines sold on prescription, but frequently diverted from the medical circuit (oxycodone, methylphenidate, methaqualone, pethidine) on powders and tablets. A few milligrams are enough.
Identification tests for solid substances

In stock
View this product
Highlights the presence of THC on resin (hashish), leaf/weed (marijuana) and oil by a reddish color.  Very simple to use, economical and highly reliable. Results in few seconds !
Saliva tests

In stock
View this product
Saliva test for the detection of the use of tobacco products, mainly cigarettes. It detects the presence of cotinine, ie the main marker of nicotine in saliva.Minimally invasive screening, very reliable and results given in 10 minutes.
Identification tests for solid substances

In stock
View this product
Identifies cocaine on powders and stones. Place a few milligrams of the substance to be identified in the ampoule, if the liquid contained inside turns blue, it is cocaine. Results in few seconds.
Tap to zoom