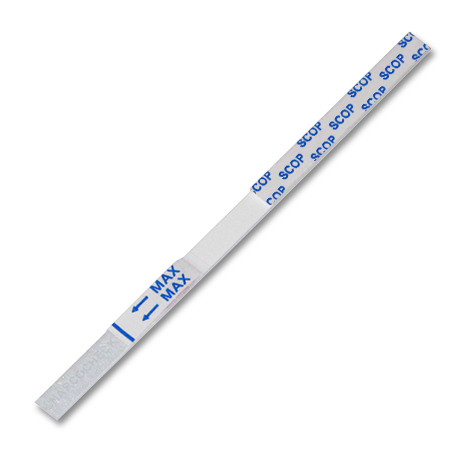 For the urinary detection of Scopolamine intake, which is a hallucinogenic alkaloid extracted from plants of the Solanaceae family. Simple, fast and reliable test.

The NarcoCheck® SCOP rapid test strip is an immunoassay for the fast detection of Scopolamine use in human urine.

Scopolamine, also known as hyoscine, is a natural or synthetic anticholinergic substance structurally very similar to atropine, used to treat motion sickness, postoperative nausea and vomiting. It can be used as an injection, orally and as a transdermal patch.

Scopolamine is the main active component produced by certain plants (Datura, Brugmansia and Duboisia), which have historically been used as psychoactive drugs, due to their hallucinogenic effects.

Scopolamine has become infamous under the names of "Dragon's Breath" or "Burundanga", as it can be used for chemical submission. Many victims have been robbed or raped without being able to fight or resist, as scopolamine can cause a total loss of willpower, followed by an absence of memory of events.

This urine test for scopolamine can detect any use for 1 to 3 days after the last intake.