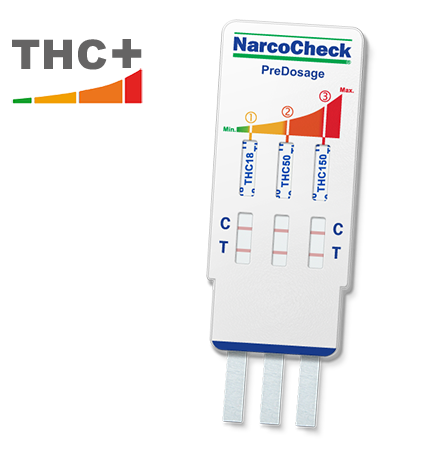 The very first test that evaluates the amount of cannabis present in the urine sample!

Beyond a simple Positive or Negative result, you now know if the consumption of cannabis is LOW, MEDIUM or HIGH.

a new revolutionary urine test for

At the forefront of cannabis screening, this test does not only say Positive or Negative.

It gives an indication of the quantity of THC that is detected in the urine sample.

This information is very useful to monitor the evolution of a consumption or the good progress of a withdrawal.

This version covers the concentration levels of THC which generally correspond to light, or even more or less regular, consumption.

This version allows a more precise detection of the cases of frequent/regular or even chronic consumption, like the daily use of cannabis and marijuana.

This test is extremely effective over time, when carried out in series (on a weekly basis, for example). A first screening serves as a reference test. The following tests will then show the decrease or increase in THC level in urine. By leading regular screenings, it will be possible to determine if the subject has stopped his consumption or if he has smoked again.

You can start by performing extended tests (5 levels), starting from the highest reference point and following the elimination of the largest quantities of THC.

When levels 4 and 5 become negative, it will mean that the concentration of THC will have decreased significantly, and the monitoring can be continued with standard version (3 levels) tests until all remaining traces of THC are eliminated (all levels turning negative).

In the event of re-consumption, you will immediately be alerted by the sudden increase of the positive level of the test.

This test is recommended for...

What do the different levels of this test reveal?

This level corresponds to the international standard threshold for the detection of cannabis.

Benefits of our PreDosage system (a THC test with multiple levels)

People can now have a clear picture of their own situation

Many casual consumers would be surprised to find out how much their urines can be loaded with THC. Today's marijuana has nothing to do with the one used during the 1970s / 80s. Marijuana/weed and hashish are infinitely more powerful nowadays, as producers strive to make their drugs more addictive to "retain" their customers. As a result, enormous levels of THC are ingested with each smoked joint. The point is to have them stop lying to themselves, because they would know now that some occasional joints can generate a strong and constant concentration of harmful substances in the organism, so cannabis can't be as safe as they wish it to be.

Knowing that a teenager or a loved one is positive for cannabis is important, but having an indication of the level of consumption is even more necessary! This can help to evaluate the urgency of the situation. Indeed, people who smoke marijuana generally tend to greatly minimize their level of consumption. For parents, it is therefore difficult to know the magnitude of the problem. Now, thanks to the PreDosage system, they can have a clear indication on the level and habits of consumption of their teenagers.

Monitor the evolution of a consumption or the progression of a weaning:

When a cannabis user makes a commitment to put an end to his addiction, the support of his entourage is absolutely paramount. Encouraging and motivating is a huge part of helping those who decide to quit smoking cannabis. But also needs to realize that this commitment cannot be made lightly. Initial screening tests with PreDosage help to maintain constant vigilance and to monitor the level of cannabis in urine. If the amount of THC in the urine goes up during this process, it may indicate a possible relapse. The entourage can then react without wasting time. If the weaning is respected, the former consumer should see his / her THC positivity reduced from level to level until a totally negative test after a few weeks. This finally negative test can also constitute an important psychological aid. Some will choose to save it, because it will be able to symbolize permanently the detoxification of their organism and the victory over the addiction.

What does this test exactly detect?

Cannabis in all forms, namely :

Whatever the mode of consumption is:

How long does cannabis remain detectable in the urine?

The detection timeframe of cannabis use in urine varies depending on the metabolism and level of consumption of each person. 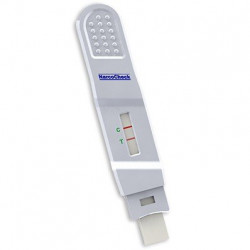 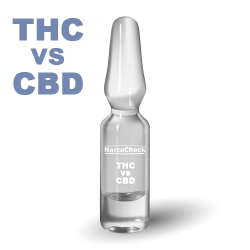